Started With Fireworks And Never Looked Back

PrimoWireless seems to be everywhere in Taranaki. Maybe it’s the utes carrying the distinctive multi-coloured logo, symbolising the fireworks that quite literally marked the start of the business. Maybe it’s the way founder Matthew Harrison, a larger than life personality, stands out in a crowd.

About 12 years ago Matthew was working at PowerCo. He and a mate were passionate about on-line gaming. Both lived in Inglewood – a few kilometres apart; one rural, the other urban (or as near to urban as Inglewood gets.)

Gaming’s an activity where for the true enthusiast speed is king – a nanosecond too slow and you die! So they wanted to connect their computers directly bypassing slow phone lines.

They knew line of sight radio could allow them to cobble together their own connection and increase their speeds, so they started by putting antennas high on their rooftops. But in the flat terrain, no binoculars at hand, and with significant distance to contend with, they had no way to prove whether their homes could see each other.

So they each clambered onto their rooftops and at the appointed time lit rockets left over from Guy Fawkes. They found they did have a line of sight connection at the achievable altitude. Game on! 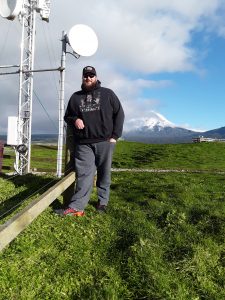 Their indoor antennas did the job just perfectly. That part is not rocket science – there’s an old joke about using household woks for connectivity.

However, the fireworks had attracted the curiosity of neighbours who, in broadband-starved Taranaki, wanted in. Then the daughter of a neighbour from further afield enquired and was given a connection too. Almost by accident, Taranaki had a new telecommunications provider.

Meanwhile Matthew had left PowerCo to work in a local computer shop where he came to realise that a huge number of Taranaki people were craving better broadband. A mate was working for Inspire.net – the doyen of New Zealand’s WISPs – so Inspire let Primo resell its connectivity, initially across four ADSL copper lines. Primo went on to negotiate a backhaul service from Kordia in New Plymouth which was a mere 30Mbps but which Matthew says seemed a lot at the time. By 2007 he had an incorporated company, half a dozen wireless sites and a brand.

Eleven years on PrimoWireless is a Taranaki icon with more than 3000 customers served by around 80 transmission sites. It offers a choice of, fibre (where available), copper, or WISP wireless connectivity. Centred around Mount Taranaki, Primo extends from the west coast to Mokau in the north, Whangamomona in the north east, and approaching Patea in the south, nudging against friendly fellow WISPs at each boundary.

The ratio of customers to sites is high by WISP standards – for example the German Hill site we visited (pictured) connects 180 customers which is a big customer count for a WISP tower by any standards. The Taranaki terrain is a unique combination of mountains and lowlands. In the east the province comprises very rugged ridges and valleys. In the west there’s lots of flat land but a highly inconvenient mountain that blocks line of sight traffic. Primo responded to the latter early on by building a spider’s web, starting with a ring of sites right around the mountain to serve the huge population of dairy farmers. The site on the very picturesque German Hill, with its stunning views, is pivotal to this. Primo has been awarded a significant contribution from the government to upgrade sites and expand coverage as part of the Rural Broadband Initiative. They started building and upgrading sites within days of the contract being awarded in August 2017, way earlier than the big cellphone companies who a year later are still at the planning stage. An expanded list of new users has since been put on the table, and Primo is quietly confident of gaining a whole lot more customers on the back of its strong performance with the earlier round.

Walk into the Molesworth Street office and you get the sense of a happy, capable, friendly team. There’s a lot of laughter. Many are old friends of Matthew, or friends of other staff. Total headcount is around 16 people – two in management, three each in helpdesk, installation, accounts and back office, and one in HR. There’s also a handful of part timers. 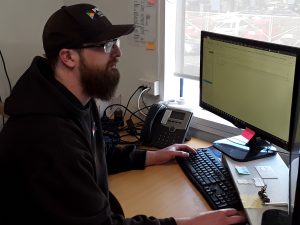 “I came from a job doing night fills at The Warehouse but this is so much more rewarding – I do tech work, troubleshooting, inbound calls from customers and emails. Now and then I get to go out on a job if extra hands are needed. There’s been a huge amount to learn but the team helped me a lot in the early days.”

Finding the technical people with the versatility to run the business is a challenge. “WISPs are a unique sub-set of the IT sector,” Matthew says. “The younger ones take a while to train – everything is learned on the job. Versatility is crucial – they need to understand IT, working at heights, safe 4 wheel driving in steep terrain, computers, solar power, and building. The last guy we recruited was a landscape gardener who has useful knowledge when we need to build retaining walls. Safety is an absolute priority.”

“I’ve been at Primo 18 months. I mostly do accounts receivable, and I meet and greet customers who call in. The best thing about working here is getting to play with all the new technical toys – cameras and hardware – and being able use “geek speak.” I enjoy the family orientation and culture, we all get along and because we are all geeks we speak the same lingo.” 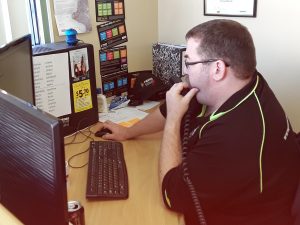 Primo customers seem a happy bunch too. One I visited was new customer Arabella Cornthwaite who with her family, moved 2 years ago from Raetihi to manage a 1300 acre sheep and beef property, an hour from Stratford and 90 minutes from Taumarunui on the “Forgotten Highway.” They were previous customers of Inspire.net who Arabella says were “really good,” but inherited a very slow and expensive satellite service. 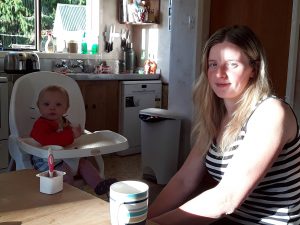 “Last Thursday Primo connected our area up,” Arabella tells me. “It’s so good – we’ve used it several times already to talk to the family in both Raetihi and the UK on Skype video. We can now do the banking and receive the kill sheets each day to help manage the farm efficiently. And it will be great when the children get to school age.”

Over a decade Primo has become an icon – up there almost with the cows and the mountain. You get the feeling that it has made a huge contribution to the development of the region and its industries. It feels strong, responsive, and solid – larger than life like its founder and set for a very bright future worthy of the fireworks that marked its beginning.